St Bastian Tea Co has its roots in fantasy and friendship. Shawn Strider, or Prince Strider as he’s known within the Realms of Labyrinth, had been creating and running the Labyrinth Masquerade Ball since 1997. Inspired by the eponymous Henson film, Labyrinth has been a setting of wonder, frivolity, and decadence for over two decades. In 2010, Shawn wanted to introduce a Tea Room to the Masquerade Ball, loosely based on the chance experience he had being caught in a snowstorm on a train to Seattle. Justin Bastian, a classically trained chef, had been working culinary for the Ball. Justin was a coffee drinker himself at the time, but quickly delved into the history, styles, and preparation of tea. He and Shawn discussed favourite tea styles and flavours, leading to a discussion about what the Prince would drink. Who the Prince is, at his core, is a storyteller: campfires, round tables, and high fantasy. That discussion became the springboard for our first tea for the Labyrinth of Jareth, the only tea that has appeared in every Tea Room lineup, and the only tea made originally for the Ball that is featured in the St Bastian lineup. The Prince, as that tea is now called, has gone through several iterations, and inspired other teas as well, but the current and final version is a smoky delight. The Prince is a glass of scotch in tea form.

The Tea Room was a success, but St Bastian’s was yet to be formed. Cynthia Egan comes from an academic background, rather than one of culinary pursuits. In 2013, Cynthia started working in the Tea Room. Despite her lack of kitchen experience, as an avid tea drinker and a resident of England while she earned her Masters at Oxford, she was an eager and well-suited addition to the tea room. She quickly became Justin’s “Left Brain,” seeing to the paperwork and organization of tea. The Tea Room remained after the Ball changed locations in 2015. Labyrinth now had a home at the Millenium Biltmore and the Tea Room always sold out, even before the weekend of the Masquerade Ball. People were enthused by our tea and the joyous, sensory feast that is Labyrinth even inspired many of our patrons to stir Justin’s homemade clotted cream into their cream teas, creating a dessert you can drink. While this was not our intent, it showcases just how the teas themselves can inspire and engender a life of their own. The patrons loved our teas and the notion of taking some home with them. In 2016 we decided to formalize this endeavour as a proper business and created St Bastian Tea Co. We continue to run the Tea Room at the Labyrinth of Jareth, which has its own ever-evolving set of teas, have blended exclusive teas for other creative enterprises and events, and have our own Flagship line of Teas to represent the spectrum of what St Bastian’s has to offer. What started as a hobby became a passion and a life for the three partners.

Justin and Cynthia craft these teas, taking joy in the process as well as the product. What began as Justin creating these magical blends, while Cynthia diligently took notes and recorded recipes, led to some unintentional on-the-job training. While Cynthia started off suggesting notes after taste tests, she now participates fully in the blend designs right alongside Justin. She still records everything of course and approaches the inspiration for the blends in her own way. Justin came from kitchens and knows instinctively which flavours will compliment the others, possessing an uncanny ability to know exactly what element is missing from a blend, sometimes without even smelling the current process. Cynthia came from a world of books, harkening back to cultural and historical uses for certain herbs, or associations with a piece of literature, bringing a sense of historical grounding and thematic ties to their various blends. Using his talents as storyteller and showman, Shawn then takes these pieces of imbibable art and packages them into physical pieces of art, ready for consumption.

Once St Bastian Tea Co became an organization in its own right, we began partnering with brands outside of the Labyrinth of Jareth. Designing blends for bands, games, and shows, we even came full circle to our Labyrinthine roots when St Bastian hosted a tea stand at Henson studios, featuring two new teas, blended exclusively for the Farscape private anniversary event held there. Just as our teas tell a story, we let the story of the property come through not only in the teas themselves, but also in their presentation. Justin and Shawn were in no way newcomers to hosting events of this manner. In 2011, the same as the first year of the Tea Room, Shawn invited Justin to cater an exhibition party at the Los Angeles County Museum of Art (LACMA) for the Tim Burton creative retrospective. While St Bastian teas have partnered with a number of media companies for events such as these, our teas have also found their way onto menus at cafes and tea rooms. Our cold brew iced teas were even featured at the Millennium Biltmore hotel, the same venue that the Labyrinth of Jareth has called home for half a decade now.

Here at St Bastian’s, we think of every tea and set of teas as a journey, focussing on the story a particular blend tells and the theme of a collection of teas. We craft joy through our physical craft: caldae et theae miscellae manu sui generum (teas and tisanes, blended by hand, of their own style). We delight in the designing, blending, and imbibing of our teas as well as in the joy of friends, family, and patrons who enjoy our creations. We pride ourselves on our bold, unique flavours. Blended specifically to stand out when enjoyed hot or cold, our teas are unmistakably unique, even compared to each other. Our motto, Miscellae Manu (Blended by Hand) is not only a descriptor of our teas, but also one of the daily joys of running a tea company. The smell of tea in the air and the feel of the leaves in our (gloved) fingers brings such delight, even after years of doing so. St Bastian Tea Co reflects the magic and fantasy of the brands we work with, not only in the blends we create, but in the friendship and partnership of Shawn, Justin, and Cynthia: the three heads of this beast we call St. Bastian.

As you sip on your cup of St Bastian tea, know that we are raising a glass back to you. Bibe bene (drink well)! 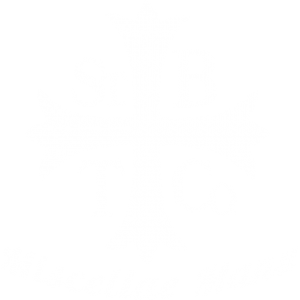